Research Scientist, Energy Institute, The University of Texas at Austin

Author of the book The Economic Superorganism.

Researching the role of energy in our past and future 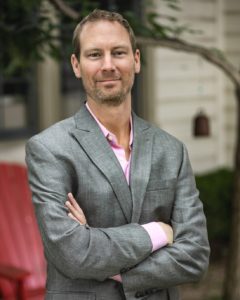 Dr. Carey W King performs interdisciplinary research related to how energy systems interact within the economy and environment as well as how our policy and social systems can make decisions and tradeoffs among these often competing factors. The past performance of our energy systems is no guarantee of future returns, yet we must understand the development of past energy systems.  Carey’s research goals center on rigorous interpretations of the past to determine the most probable future energy pathways.

Carey is a Research Scientist at The University of Texas at Austin and Assistant Director at the Energy Institute. He also has affiliations within the Jackson School of Geosciences, the McCombs School of Business, and the LBJ School of Public Affairs. He has both a B.S. with high honors and Ph.D. in Mechanical Engineering from the University of Texas at Austin. He has published technical articles in academic journals such as Ecological Economics, Environmental Science and Technology, Environmental Research Letters, Nature Geoscience, Energy Policy, Sustainability, and Ecology and Society. He has also written commentary for or been interviewed by MarketPlace, American Scientist and Earth magazines, and major newspapers such as the The Hill, Dallas Morning News, Houston Chronicle, San Antonio Express News, and Austin American-Statesman. 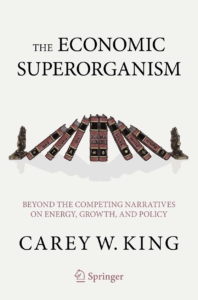 Sign up for Carey’s Newsletter and Donate to Research:

Sign up for Carey’s Newsletter or donate to his research group at University of Texas at Austin:

The turn of this century saw the cheapest-ever energy and food combined, and here’s why we may never return to those historic low numbers.

“Contemporary discussions of energy resources and technologies are full of conflicting news, views, and opinions from extreme sides of arguments. The average person is understandably confused. Depending on who you listen to, horizontal drilling and hydraulic fracturing have either placed the United States on the verge of energy independence, or exposed the insolvency of oil and gas companies as they spend more money than they collect from sales. Renewable energy technologies can either obviously serve all of our needs, or are a subsidized path to economic ruin.”  Read more …

On the idea of using flared natural gas on-site [of oil and gas extraction] to generate power for Bitcoin mining, we could alternatively “Stop issuing flaring allowances and force the industry to actually send the natural gas into the pipeline system,” King said. “Potentially to more NG storage sites that an provide more winter supply in the case of another [major winter storm] Uri-like event.”

Despite people spending more time at home, Carey King, an assistant director and research scientist for the Energy Institute at the University of Texas, explained that, nationwide, household energy usage did not spike tremendously during COVID-19.

“Simply put, more of us need to think about the broader relationship between energy and economic theory”

In the face of ERCOT’s rolling blackouts during the 2021 Valentine’s Day winter storm Uri, resist blaming one power source because that detracts from making the entire electricity and energy system reliable.  Read more …

Listen to Carey discuss his book on the podcast the Energy Transition Show, of which host Chris Nelder states: “Heady stuff about the macroeconomics of energy transition!” (and he gives it a Geek Rating of 7.

December 9, 2020 (Center for the Advancement of the Steady State Economy BLOG): “The Impact of Evolutionary Pressures on Economic Narratives”

Which economic narratives, and subsequent mathematical models, should we be following, and are there some unspoken reasons why we might expect one to become more prominent than the other?

In this blog I use my HARMONEY (“Human And Resources with MONEY”) economic growth model (also see this free early version) to demonstrate the dynamics of the Jevons Paradox: that an increase in end-use efficiency leads to an increase in total resource extraction, rate of resource depletion, and final level of depletion.

In a podcast for the United States Association for Energy Economics, Carey discusses content from his new book, The Economic Superorganism: Beyond the Competing Narratives on Energy, Growth, and Policy, that relates to how some economists, ecologists, and other scientists view the economy as a system that has evolved in the same manner as biological organisms. For reasons we don’t necessarily fully understand, the economy seems to pursue what is known as the maximum power principle and increasing rates of work output (in the thermodynamic sense of work). Carey discusses some of the philosophical and policy-related questions arising out of this concept, such as whether there is some inherent growth imperative that is making it difficult for we, as humans, to invoke enough agency to pursue long-term goals such as a low-carbon energy transition.

Abstract: In this episode, Robert talks with King about his new book, The Economic Superorganism: Beyond the Competing Narratives on Energy, Growth, and Policy, what he sees as the “hollow narratives” about energy and power systems, Thomas Malthus, why King  calls himself a “finite earther,” the relationship among GDP, energy, and human well-being, and why the global economy should be viewed as a “superorganism.”

This is a discussion with financial advisor Jim Cox for his podcast Human Insights with James Cox.  We discuss ideas in my book, The Economic Superorganism, on how we can relate the trends and structure of the economy to changes and properties of the energy system.  It is a nice free-flowing conversation.

A discussion with Carey King, Steve Keen, and David Daniels as part of the webinar series of the United States Association for Energy Economics.

Summary: Are the right theories and assumptions being used to integrate the economics of energy and climate change? Can the current crop of economic models (e.g., IAMs) effectively inform energy and carbon policy? What are the economic theories and assumptions behind these models, and are they up to the task? If not, what economic theories and frameworks can improve our modeling of energy and economic interactions? Join this webinar for insights into the practical and theoretical difficulties and possibilities for modeling the important linkages between energy consumption and economic growth and distribution. (Direct YouTube video link)

April 18, 2020:   “A Journey to Understand Relationships Between Energy and the Economy“, Presentation to the Engineers for a Sustainable World DigiCon20 Conference

December 18, 2019 (BLOG): My Reply to The Queen’s Question about the Financial Crisis: It was Debt and Energy

When she attended a briefing at the London School of Economics in 2008, the Queen of the United Kingdom, Elizabeth II asked why (almost) no one foresaw the 2008 financial crisis.

My answer to the Queen is first “I apologize for having studied science and engineering before 2008, rather than economics, and thus, I could not answer your question in 2008.”  Second, to answer your question we must account for both the use of natural resources, such as energy, and debt, as I have done in my latest publication in the journal Ecological Economics, “An Integrated Biophysical and Economic Modeling Framework for Long-Term Sustainability Analysis: the HARMONEY Model”.

Here I speak with David Spence, Baker Botts Chair in Law at the University of Texas School of Law, and Professor of Business Government & Society at the McCombs School of Business.  This is part of his effort, with other colleagues, to promote informed discussion and education about the tradeoffs when choosing different energy resources and technologies. Length: 20 minutes.

January 17, 2019 (OP-ED): The battle of energy-economic narratives is tainting the Green New Deal

An op-ed discussing how people use their “energy and economic narratives” to discuss the feasibility, or lack thereof, of the Green New Deal.