In my book The Economic Superorganism: Beyond the Competing Narratives on Energy, Growth, and Policy, I describe narratives along two axes (see Figure 1): energy and economics. Because people disagree as to the costs, capabilities, and benefits of different energy technologies and resources, proponents of different visions use narratives to convince stakeholders of the validity of their positions. 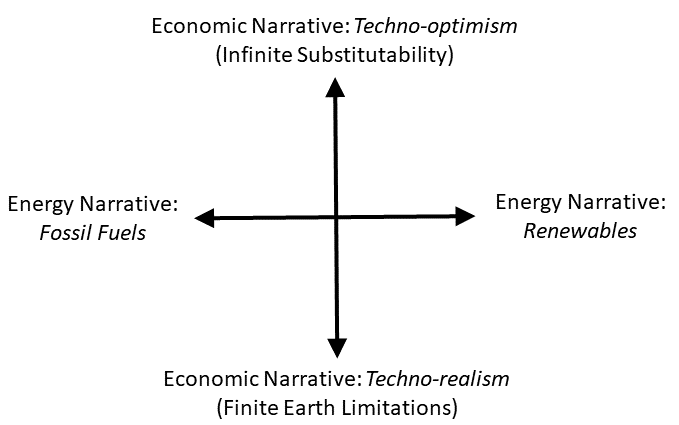 Figure 1. A diagram of narratives along two dimensions: energy—fossil versus renewable;
economics—technological optimism of infinitely substitutable technology versus technological
realism that the finite Earth imposes limits to growth.

The two energy narratives (fossil fuels vs. renewable energy) characterize the extreme views regarding the desired sources for our future energy system that best meet our future social and economic needs:

This narrative recognizes that fossil fuels enabled us to achieve what we have today. A proponent might say: “The physical fundamentals of fossil fuels, such as high energy-density and portability, ensure low cost and their continued dominance. Why not use them? Renewable energy technologies require subsidies to entice investment because they cannot achieve the historical or present levels of low cost and productivity of fossil fuels and related technologies. Therefore, we should promote increased fossil fuel use for the foreseeable future. Fossil fuels, and the technologies we have developed to burn them, enable us to shape and control the environment rather than the reverse situation before we invented fossil-fueled machines. Further, fossil fuels are the best hope to bring poor countries out of poverty while continuing
to increase prosperity within developed countries.”

This narrative states we can use renewable energy technologies and resources to sufficiently substitute for the services currently provided by fossil fuels. A proponent might say: “Thank you fossil fuels, but we’ve modernized. We don’t need or want you anymore. Fossil fuel production and consumption create environmental harm both locally over the short-term (e.g., air and water contamination) and globally over the long-term (e.g., climate change) to such
a degree that their continued unmitigated use ensures environmental ruin that will lead to economic ruin. In addition, the concentration of fossil fuel resources means that countries and citizens have unequal ownership of them, creating geopolitical instability over extraction and distribution. Thankfully, renewable energy technologies are now cheap enough to transition from fossil fuels. Further, a renewable energy system is the best hope to bring poor countries out of poverty while continuing to increase prosperity within developed countries.”

Both energy narratives use economic narratives to justify their arguments, and these arguments shape energy policies that affect each one of us. Economic theory in turn informs us how to perform calculations that provide insight into the ramifications of choosing one energy pathway versus another.  My book discusses how one’s economic viewpoint, or narrative, can lead one to ignore important similarities and differences between fossil and renewable energy systems.  Here, I only state the economic narratives for consideration.

This narrative posits unbounded technological change that creates substitutes for whatever we desire. It does not necessarily deny that the Earth is finite, but it does not believe that this fact affects economic or physical outcomes that impact the overall human condition. It is the view of most mainstream economists. A proponent might say: “Technological innovation has and will always address the pressing needs for society. In order to promote seeking of solutions, we need a signal. That signal is the price of a good, or a ‘bad’ (e.g., air pollution), and the signal is provided by setting up a market. Therefore we must establish and promote free markets, private ownership and profits via capitalism, and business competition. This is the way toward continued growth and prosperity. With regard to energy, as long the aforementioned criteria govern the economy, its price always decreases, so there is no need to worry.  Markets best address socio-economic issues because they process information better than any human regulator or government agency.” Got a problem? Make a market for it.

This narrative takes to heart that the Earth is finite. It is the position of many ecologists, physical scientists, and some economists. A proponent might say: “Humans need food to survive and our economy requires energy consumption and physical resources to function. These facts very much matter for economic reasons because the feedbacks from physical growth on a finite planet will eventually force changes in structural relations within our economy and society more broadly. These changes can have positive or negative outcomes for our perception of the human condition, but to create positive outcomes, we must perceive, accept, and adjust to the physical limits of a finite Earth and relate our economy to physical laws and processes. Markets can work, but they have problems. Theoretically they can include all important pieces of information, but practically, finite time and incomplete information prevents formation of pure price signals.” The narrative is summed up well by a statement attributed to economist Kenneth Boulding: “Anyone who believes that exponential growth can go on forever in a finite world is either a madman or an economist.”

Consider these 4 narratives along the 2 axes of Figure 1 anytime you read and article, policy, or book promoting or disparaging a particular energy policy or technology.

In this blog I use my HARMONEY (“Human And Resources with MONEY”) economic growth model (also see this free early version) to demonstrate the dynamics of the Jevons Paradox: that an increase in end-use efficiency leads to an increase in total resource extraction, rate of resource depletion, and final level of depletion.

Here I summarize some important features and assumptions of the HARMONEY model to give context for why it exhibits the behavior summarized below:

Here I’ll focus on changing the parameter that affects how many resources are required for consumption to operate capital to produce a unit of its output.  Equation (1) describes the quantity of natural resource consumption required during the operation of capital where K is the amount of physical capital, CU is the capacity utilization (a number between 0 and 1 indicating the fraction of the time the capital operates), and η is like an efficiency term, but its units are different.  The symbol η represents “resources consumed per unit of capital” and its units are [resources/(time·capital)].

Figure 3 shows the resources extraction rate that increases for the dashed line increasing efficiency scenario.   (NOTE: By the definition of the resource as a forest, the maximum resource extraction rate occurs when the resource is depleted to half of its maximum level. I have chosen the parameters to not extract (much) past the 50% level for the purposes of this blog as this most accurately represents our primary use of fossil fuels.)

Figure 4 shows a higher human population for the scenario in which there is increased machine efficiency.  If a model assumes a constant or exogenous population growth, then it probably cannot exhibit the backfire effect (or Jevons Paradox).  The reason that population increases with higher efficiency is that after resources are consumed to (i) operate machines and (ii) make more machines, the higher efficiency allows for more resources to be left for human consumption such that death rates remain low for a longer period of time that in turn allows population to increase for a longer period of time.  Eventually, population levels off even in the increased efficiency scenario, but in a world also with more machines (more capital).

Figure 5 shows the amount of total capital that is higher for the scenario in which there is increased machine efficiency.  The reason that the capital stock increases with higher efficiency is that after resources are consumed to operate machines, the higher efficiency allows for more resources to be left for the creation of more machines.

With increased capital, population, and resources extraction (the of the major “factor inputs” to economic production) as efficiency increases, there is also increased net output of the economy as shown in Figure 6.

Clearly increased efficiency allows for (i) higher resource depletion, (ii) higher extraction rate of resources, (iii) an increased population, and (iv) more capital accumulation.  For the latter two stocks, population and capital, higher operational resource efficiency enables more resources to be allocated to the accumulation of both more people and capital that do more work.  This is consistent with the idea that more useful work, which is all energy inputs (technically exergy) times their full conversion efficiencies, goes hand in hand with more GDP.  Thus, by making choices to increase efficiency in the real economy, so far (globally to date) this has translated to more useful work, resource extraction, and net output (or GDP).

Figure 7 shows the real price of natural resources and goods (or machines).   With increasing efficiency (or decreasing η in the model), the price for a unit of natural resources increases relative to a constant efficiency world, and this is precisely the trend we’ve experienced for world oil prices that increased after the 1970s, when oil efficiency efforts started.  To date, oil prices have yet to return to the low prices experienced for the 90 years previous to 1974.  The price of goods (or machines) decreases with the increasing efficiency in their operation.

For the net energy geeks out there, Figure 8 shows the “net external power ratio”, or NEPR, which is the same concept that many people refer to as EROI = “energy return on (energy) invested”.  (See my previous publication for reasons why I prefer to use NEPR as a more specific term.)  Equation (2) expresses the idea behind the mathematics.

When machines consume less resources for their operation, then there is period in which NEPR increases before reaching a maximum from which it again declines.  This increase in tandem with increasing efficiency represents an increased net resource flow available as “net output,” which in the economic sense is that output available for consumption and investment.

Figure 9 shows the wage share, or percentage of GDP that is paid to wages, increases during the time that efficiency is increasing from about year = 50 to year = 110.  An increasing consumption of resources and GDP can thus translate to a higher (or at least a share decreasing at a slower rate) distribution to wages.

Figure 10 shows that the debt ratio is temporarily lower while efficiency increases. Not shown (due to stopping the simulation) is that the debt ratio in the efficiency case also starts to decrease because resource constraints eventually inhibit investment below profits such that companies pay back debt.  See the paper for more details.  To understand the current economic situation in the U.S. and most OECD countries, it is critical to understand the context of high levels of private debt of companies and consumers (debt of consumers is not part of the HARMONEY 1.0 model).  Increasing efficiency can increase output faster than debt (hence lowering debt ratio), but only for a while. Ultimately, the second law of thermodynamics limits the efficiency of energy conversations.

The HARMONEY model shows many trends that are indicative of the real world economy.  Thus far, globally, we keep making end-use devices more efficient, and we keep consuming energy at higher rates. When η is decreased, or efficiency is increased, in the HARMONEY model, resource extraction increases, population increases, capital increases, and net output increases.  Increasing efficiency is a tactic to increase consumption and output, not a tactic to reduce overall resource consumption.  The Jevons Paradox is only a paradox to those who are not thinking about the dynamics of the economy and how it responds to changes in efficiency over time.